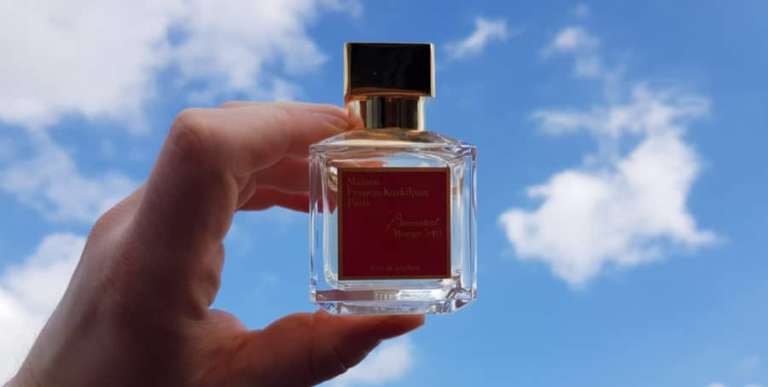 Who is Francis Kurkdjian, why is there a TikTok craze about his fragrance, and what does Baccarat Rouge 540 smell like? These are just some of the questions many have been asking lately. And we’re here to answer those questions for you.

Baccarat Rough 540 smells like the perfect marriage of floral and woody notes. There’s a spiciness to the scent, but there’s also an absolute freshness to it. Most notable is the unique trail it leaves, which is what most are attracted to. The fragrance was created by internationally renowned perfumer Francis Kurkdjian in 2015. And it has recently started to trend.

But buying a bottle of this coveted perfume may leave a significant hole in your pocket. Which makes it all the more desirable in the world of fashion and beauty. Even celebrities are talking about this unmistakable fragrance. So, it’s no surprise that everyone is curious to discover what Baccarat Rough 540 smells like.

Who is Francis Kurkdjian?

Francis Kurkdjian is only one of the most illustrious perfumers in the world. This French Armenian businessman has worked with Burberry, Elizabeth Arden, Dior, and Jean Paul Gaultier. In fact, these are just a few of a very long list of famous brands he’s created equally famous perfumes for.

Among his many accolades are the François Coty best perfumer award received in 2001. He also snagged the Cosmetique Magazine’s best perfumer of the year in 2008. And, after almost 30 years in the industry, Kurkdjian runs his own prominent perfume company known as Maison Francis Kurkdjian.

Before creating Baccarat Rouge 540, Kurkdjian was probably most well-known for creating Jean Paul Gaultier’s Le Male. However, due to a viral TikTok video that inspired multiple more videos, Baccarat Rouge 540 is the talk of the town.

What is Baccarat Rouge 540?

Baccarat Rouge 540 is one of the most talked-about fragrances in the world. And it was created by Francis Kurkdjian’s company, Maison Francis Kurkdjian. TikTok is abuzz with videos and reviews on this sought-after fragrance which carries a price tag of up to $365.

Kurkdjian originally created the fragrance in 2015 for the French crystal-making company, Baccarat. The fragrance was to mark the company’s celebration of its 250th anniversary. And, and that time, only 250 bottles were made. Each bottle was made of crystal and was numbered.

Before long, word got out about the incredible smell of the fragrance. Those who were fortunate enough to own a bottle sang its praises. And they continued to report the receipt of multiple compliments when they wore the perfume.

He could not ignore the excitement around his creation, and Kurkdjian ended up releasing it through his company to the public. Since then, many influencers and beauty vloggers have gushed over it. Even Rihanna is said to have spoken about it, saying it’s her favorite fragrance.

But what makes this particular fragrance so good? And, as numerous people have been asking, what does Baccarat Rouge 540 smell like?

In the simplest terms, Baccarat Rough 540 can be described as a woody-floral buffet for the senses. And this combination is what makes it the ideal unisex scent.

This delightful fragrance incorporates cedar and fir resin as its foundation. Amber wood and a type of amber known as ambergris make up the middle notes. And dancing lightly above are the top floral notes of jasmine and saffron.

What you’re left with is a fresh and spicy fragrance that brings an air of warmth to the fore. With all its floral and woody notes, the perfume is surprisingly perfectly bold and understated at the same time.

Most who smell Baccarat Rough 540 for the first time are struck by the trail of scent left by the person wearing it. Many describe this trail scent as unique and not dominated by any of the perfume’s ingredients. In fact, it’s as if the ingredients are simply the instruments in an orchestra producing a symphony.

Several individuals have questioned the price tag on this perfume and asked whether the smell is worth the cost. While it’s definitely on the more expensive side, a little goes a long way. A single spritz of Baccarat Rough 540 will last an entire day. Which gives you more bang for your buck.

Baccarat Rough 540 also smells expensive in the best possible way. It’s the smell of sophisticated confidence with a dash of charisma. And it most certainly lives up to the excitement and anticipation.

Clearly, the Baccarat Rough 540 fragrance is in a league of its own. And we’re bound to see interest and sales increase as word about its attractive scent spreads.

In essence, Baccarat Rough 540 smells fresh, spicy, and warm. There are distinctive floral jasmine and saffron notes at the fore. And there’s a bold foundation of amber wood, cedar, fir resin, and ambergris.

Baccarat Rough 540 comes with a higher price tag. But it offers a long-lasting, unique, classy, and chic fragrance beloved by men and women across the globe.

How To Clean A Used Couch

How Much Is Laser Hair Removal for Legs?