Why Does The Queen Carry A Purse? 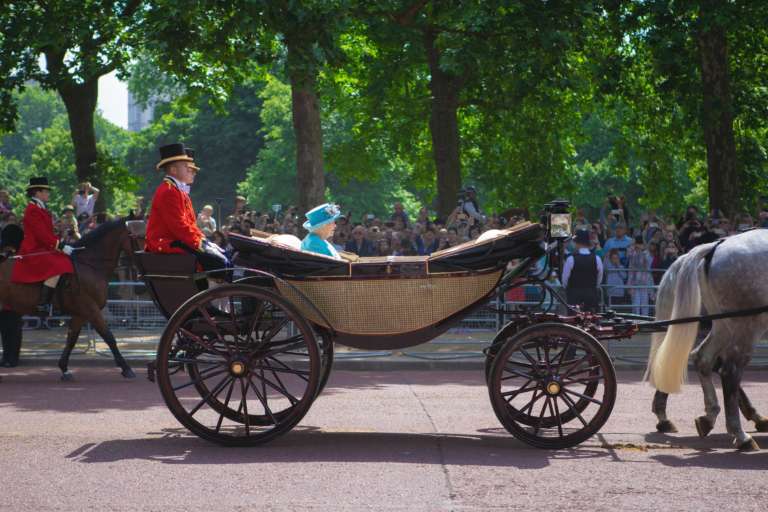 There’s conflicting information out there with regards to why the Queen carries a purse. Some have speculated that the handbag is used to signal her staff. While others report that it’s simply a means to keep a few essentials on her person.

So, why does the Queen carry a purse? The most plausible reason was provided by Phil Dampier, author of the book “What’s in the Queen’s Handbag? And Other Royal Secrets”. Simply put, Her Majesty Queen Elizabeth II sees her signature Launer handbag as her most valuable possession. And stated that she would feel lost without her purse by her side.

But there may be a little more to it than that. Especially when you consider that the Queen carries her handbag from room to room when she’s at Buckingham Palace. Which, for most, would seem a bit odd. However, we have a few ideas as to why her trusty purse may never leave her side.

Since 1968, the prominent UK brand Launer has made every handbag the Queen has used. The company received a royal warrant to design and supply this beloved monarch with her handbags the same year. Since then, Her Majesty is believed to have accumulated north of 200 Launer purses.

Reasons Why the Queen Carries A Purse

When the Queen is out and about, you’ll see her with her handbag slung over her left arm. She keeps the purse close to her no matter the occasion and makes sure to keep her right arm free for handshakes.

You’ll even see the Queen clutching her purse while sitting in the back seat of one of the royal vehicles. And it’s always less than an arm’s length away if she’s dining out.

However, it’s believed that Her Majesty also clasps a reliable Launer while indoors at Buckingham Palace. In fact, this has been depicted on the popular Netflix series, “The Crown”. She even has the handbag with her when she does not have any company and is alone with the staff.

One photo published in the media shows the Queen shaking Boris Johnson’s hand in the Audience Room at Buckingham Palace. The Queen clearly has her Launer handbag slung over her left arm as she shakes the Prime Minister’s hand in this photo.

These instances spark questions about why the Queen carries a purse. But here are the possible reasons.

It’s part of the Queen’s Outfit

While little orphan Annie felt she was never fully dressed without a smile, the Queen feels the same about her purse. She sees it as an integral part of her outfit and, therefore, has it with her at all times.

In fact, it’s Gerald Bodmer, CEO of Launer, who has provided this information. Bodmer has been quoted as saying that the Queen “doesn’t feel fully dressed without her handbag”.

And, let’s face it, you might also be tempted to carry your handbag around at home if it was a custom Launer. Think of how easily you’d be able to touch up your make-up after an episode of “This Is Us”.

The Queen Likes To Keep Essential Items Close By

This is possibly the most practical and plausible of the reasons why the Queen carries a purse. In fact, it’s the very reason anyone carries a purse. And most people’s purses contain essential items such as lipstick, tissues, lozenges, etc.

However, the Queen is said to keep the purse with her indoors at Buckingham Palace for the same reason. And considering the size of the palace, one can understand that popping to the bedroom to grab your glasses might be challenging.

According to Phil Dampier, the Queen’s essential items include a make-up case given to her by Prince Phillip and treats for her corgis. She also often keeps her glasses, a fountain pen, a diary, and mints in her purse, among other things.

The Queen’s Purse is Used to Signal her Staff

Apparently, there’s a meaning behind the Queen moving her handbag from her left arm to her right arm. Some have claimed that it’s an indication to her staff that she wants to finish up whatever she’s doing.

If the Queen places her purse on the floor, it’s believed to mean that she’s in an unpleasant situation and needs assistance. When the handbag is placed on the table at a dinner, it indicates that she’d like the dinner to end soon.

However, we believe this information to be entirely speculative and, at this point, unconfirmed.

There could be various reasons why the Queen carries a purse. However, it most likely offers the convenience of having some of her essential items close by at all times.

That said, next time I see the Queen on television, I’ll be watching closely to see what she does with her purse. Who knows, I may just catch her subtly signaling her guards.

Why Should You Buy A Property For An Off-Grid Retreat Centre?

How To Keep Your Family Warm And Cozy This Winter

Birthstones Between July & December And How It Can Affect Your Life